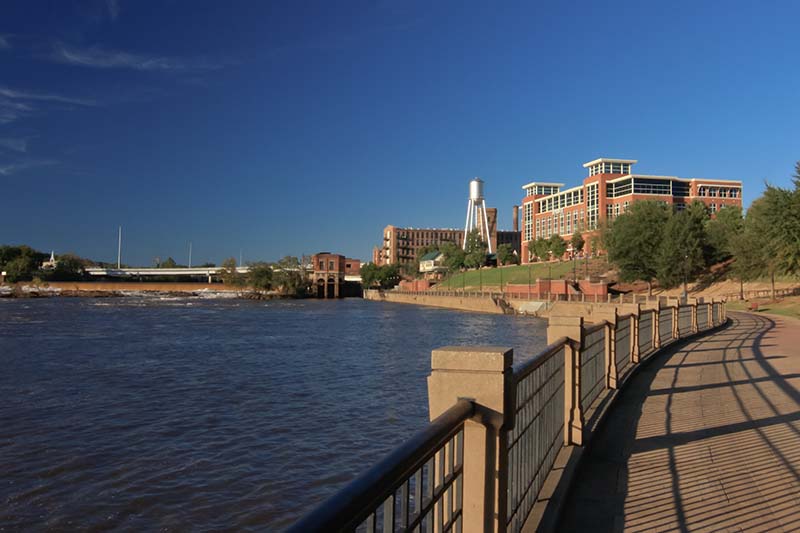 The RiverWalk is an outdoor 15-mile linear park that hugs the banks of the Chattahoochee River.

For centuries, the Chattahoochee River has flowed from the mountains of North Georgia to the oyster beds of the Florida Panhandle. Sometimes a trickle. Sometimes angrily slapping against the rocks. Always telling a story of the history of Georgia and of Columbus. The relationship between Columbus and the Chattahoochee predates written history. Spanish explorers told about the falls nearby. The Indians nation's most extensive trading center was here. Then, in 1828, state legislation set aside 1,200 acres for the town that became Columbus. Steam boats soon were unloading cotton and other products at her busy pier. Romantic ballads were written by passengers who sailed on her lazy paddle-wheelers. Commerce depended on the river with the arrival of the railroad and other means of transportation. More recently, the Chattahoochee became a Mecca for recreation. Lakes created from its lineup of dams attract fishermen from around the world and on weekends the water is filled with boats and skiers. So it was natural for Columbus to come back to the river in 1992. Four years later, that first stretch of riverfront trail was extended to the main post of Fort Benning, giving those who travel on two feet or two wheels a blend of cityscapes and untouched wildlife. The RiverWalk now extends through the campus of TSYS and into the cotton mill town of Bibb City. Join us now on a trip down the Columbus RiverWalk. Take a leisurely stroll through a city's heritage, a walk that reminds all who come of what was, what is, and what will be.