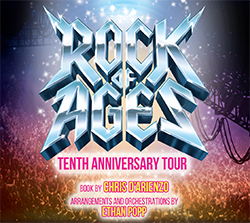 Broadway’s Best Party is turning up the volume to ten! The Rock of Ages Tenth Anniversary tour is blazing across North America! Nominated for five Tony Awards, including Best Musical. Featuring the music oft bands such as Styx, Poison, Twisted Sister, and Whitesnake among many others, this Tenth Anniversary production features a dynamic new cast revisiting the large than life characters and exhilarating story that turned Rock Of Ages into a global phenomenon.