HUGE Weekend Coming Up in Columbus with THREE Major Events! 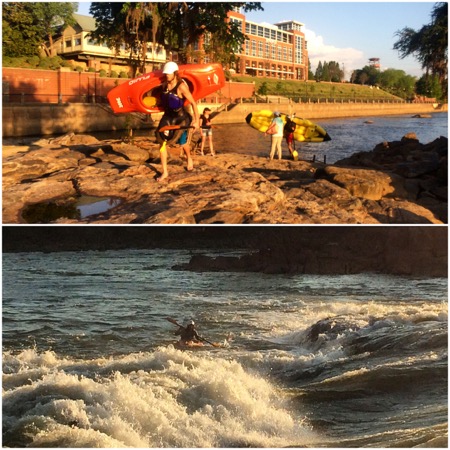 (Kayakers on the Chattahoochee River in Uptown Columbus)

You HAVE to join us in Uptown Columbus this weekend! Great sports do not always involve a ball! Sometimes, they involve wheels, paddles, and speed on the river and the road! This weekend, Columbus will be hosting international sporting events with some great food and music thrown in as well.

Local experts and community leaders are saying this is one of the biggest weekends of the year for our city and are telling everyone to come out and support the festivities. Burgers, Bicycles, and Boats? Okay, that was a poor attempt at alliteration, but it gets to the point. With 3 major events this weekend, Columbus is going all out to put itself on display, not just to the region, but to the world!

The first event is an international cycling event. Our paper, the Ledger-Enquirer reports,

A major international cycling event, the Union Cyclist International Eliminator World Cup, will be held Saturday and Sunday. The 500-meter course traveled by pro and amateur mountain bike riders will be contained to the 1000 block of Broadway It is one of a series with stops in places such as Beirut in Lebanon, Volterra in Italy, Antwerp in Belgium and Winterberg in Germany.

Next, is fun on the river with international paddle championship:

Saturday and Sunday, the Chattahoochee River will be host to the 2017 WPA Paddle Championships presented by Salt Life, with other events being held in places such as Puerto Rico and Japan. The racing action will take place on the flat water below the Riverwalk by the cascading staircase across from the Phenix City Amphitheater. The paddling will be from 9 a.m. to 1 p.m. both days and a $15,000 prize is being offered.

After all of that road and river racing, enjoy the 3rd Annual Bud & Burgers Cook-Off in partnership with Anheuser-Busch on Saturday from 4pm-9pm. Grillers will be coming in from across the region to present their best offerings from the grill for cash prizes, so the fire and as well as the competition will be red hot! Enjoy entertainment from DJ Dave Arwood and live bluegrass music by Blackberry Possum.

Becca Zajac from Uptown Columbus says, “We believe this weekend will be the highlight of the year for residents and tourists in Columbus.”

Actually, we think it will too! But, then again, we think that just about every weekend in Columbus is one of the highlights of the year! We’re kind of biased that way!